Back at Shark Fin Cove again, I thought you might enjoy seeing this rock arch down at the bottom of Shark Cove.  When you stand on the beach you can look through this arch and see the wild winter waves of the Pacific.  The water was coming through this arch frequently so I zoomed in.  The last thing I needed was to be dragged out to sea, and trust me, that happens here on the coast a lot, especially with tourists.  There are rogue waves that come up unexpectedly so if you’re traveling to this area, please don’t taunt Mother Nature!  Okay enough warnings and onto more life at the cove….

When we are atop of Shark Fin Cove, Dave and I were walking around admiring the incredible beauty when we saw two men fishing. They had the longest fishing line we’d ever seen!  If you can imagine, they were standing at the top as you can see in the pictures here and dropping their fishing line all the way down to the ocean!  On the last picture, which is very cropped and zoomed because of my distance to him, you can see that he’s bringing up a fish!  The fish actually ended up dropping off the line because his line broke.  I wonder if he ever got a fish up because with that jagged rock, it would easily cut a line. 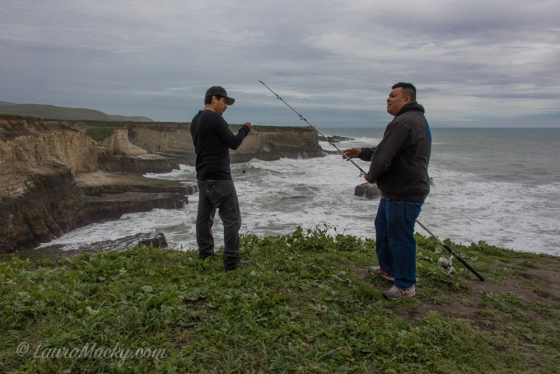