Hiking back up from Moonstone Beach, I felt the urge to turn around once more….

Please click on the image to see a full-resolution image.

During our Thanksgiving holiday we toured Hearst Castle in San Simeon, California.  What a place it is!   I was so fascinated by this place and the history of how one could accumulate so much wealth that I included a bit of history below should you be interested.  The image below is from one of the bedrooms there.

The architect, Julia Morgan (January 20, 1872 – February 2, 1957) designed more than 700 buildings in California including a mortuary near me in Oakland, California where many of my deceased relatives are.  I made a post about the mortuary some time ago which you can find here.

Hearst Castle is a National Historic Landmark and California Historical Landmark mansion located on the Central Coast of California in San Simeon.  It was designed by architect Julia Morgan, between 1919 and 1947 as a residence for newspaper magnate William Randolph Hearst, who died in 1951.  In 1954 it became a California State Park and the site was opened to visitors in 1958.  Since that time it has been operated as the Hearst San Simeon State Historical Monument where the estate, and its considerable collection of art and antiques, is open for public tours. Despite its location far from any urban center, the site attracts “millions of travelers each year”.

William Randolph Hearst was very rich to say the least.  A lot of us remember him as a newspaper magnate of the SF Examiner but he did not create his wealth from scratch.  That was done by his father, George Hearst, and what an amazing story!

George Hearst (September 3, 1820 – February 28, 1891) was a wealthy American businessman and United States Senator, and the father of newspaperman William Randolph Hearst.  George Hearst, of Scots-Irish origin, was born near present-day Sullivan, Missouri, to William G. Hearst and Elizabeth Collins.  George was raised in a log cabin on his family’s farm in rural Franklin County. His father operated three small farms, all of which were mortgaged, with slave labor.  George Hearst grew up before public education was widely accessible in Missouri, and so his elementary education was inconsistent and fragmented.  He supplemented the gaps in his formal education by observing the local mines, and reading information about minerals and mining in his free time.

When George Hearst’s father died in 1846, he took over the care of his mother, brother and sister. In addition, he did some mining and ran a general store.  He first heard of the discovery of gold in California in 1849.  Before deciding to depart, he continued to read further news on the subject so that he could be more certain it was true.  Finally, in 1850, as a member of a party of 16, he left for California.  After arriving in 1850, he and his companions first tried placer mining in the vicinity of Sutter’s Mill on the American River.  After spending a cold winter and making meager finds, they moved to Grass Valley on the news of a new lode.  Using his mining education and experience in Missouri, George switched to prospecting and dealing in quartz mines.  After almost ten years, Hearst was making a decent living as a prospector, and otherwise engaged in running a general store, mining, raising livestock and farming in Nevada County.

In the summer of 1859, Hearst learned of the wonderful silver assays of the “blue stuff” someone had picked up over what was to become the Comstock Lode, and sent to a Nevada County assayer.  Hearst hurried over to the Washoe district of western Utah territory, where he arranged to buy a one-sixth interest in the Ophir Mine there, near present-day Virginia City.  That winter, Hearst and his partners managed to mine 38 tons of high-grade silver ore, packed it across the Sierra on muleback, had it smelted in San Francisco, and made $91,000 profit (or roughly $3,550,000 in 2013 dollars).  (I can’t even IMAGINE traveling across the Sierras on muleback.  It must’ve been extremely difficult.)  It was the sight of the bars of Ophir silver that started the rush to Washoe.  George knew Marcus Daly from the Comstock Lode work, and in the summer of 1872 Daly suggested the possibilities of the Ontario silver mine in Park City, Utah.  The Ontario carried Hearst through the Panic of 1873 and produced seventeen million dollars in ten years.  Hearst later financed Marcus Daly to operate his Anaconda mine in Butte, Montana and acquired an interest in that mine as well.

After striking it rich, George made many investments.  One of his holding swas the SF Examiner (newspaper) which his son, William Randolph Hearst, took over and made even more money to build his castle on the hill in San Simeon.  He was inspired to build this castle from his childhood trips to Europe with his beloved mother.

There are so many special little spots along the California Coast and one of them is called Moonstone Beach in Cambria.  What a gorgeous place!  We had two beautiful days where there was hardly a breath of wind as we walked along the shoreline and did some sight seeing.  The sunset shot here was taken on the second evening just as a storm started to roll in.

Hope everyone had a nice holiday!  Now onto the next one! 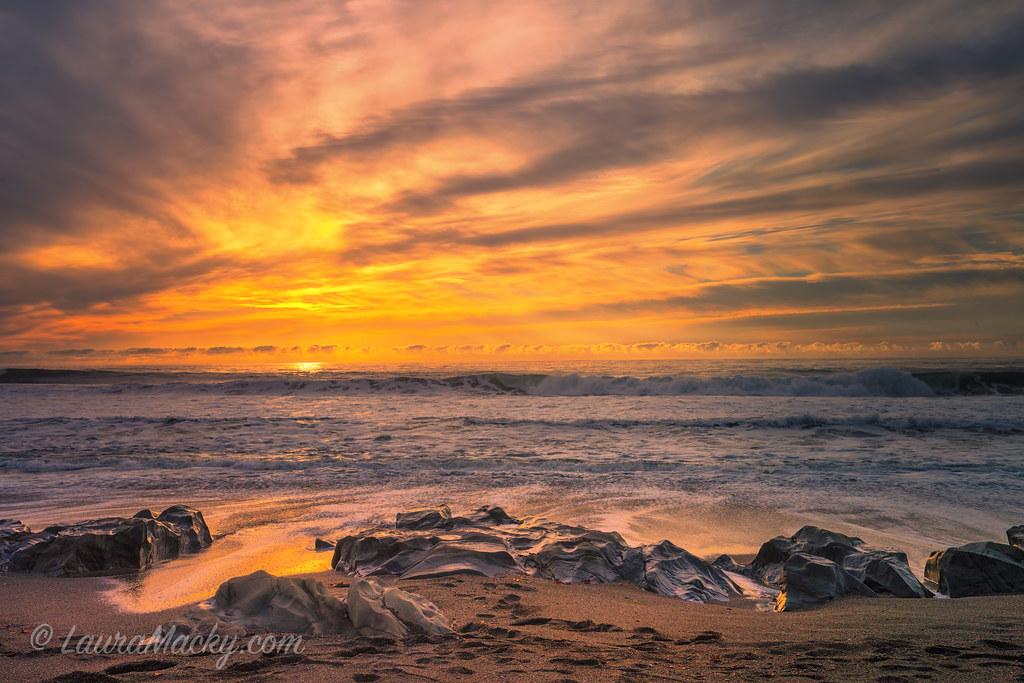