I know I’m a bit bouncing around but I forgot to post some Mare Island images.  Blasphemy!  I know you’re all on the edge of your seats (ha!) so i thought I’d post the rest in a gallery here.  What I really love about architecture are the textures and shapes and the way the light reflects off the windows.  Each scene seemed to call out to me in a different way so I had fun over a few days processing all these.

For those of you who are wondering, I really adore my Sony A7!  These were all taken with a 16-35mm Sony-Zeiss lens which is a fantastic lens.  It’s almost as wide as my 14-24mm Nikon and seems every bit as good, although I don’t do scientific tests and have yet to use it for a night shot.

I’m back at Mare Island.  There were so many photo opportunities there.  Incredible!   Instead of my Nikon I used my Sony A7.  I really love that camera.  It’s so much easier to carry around. 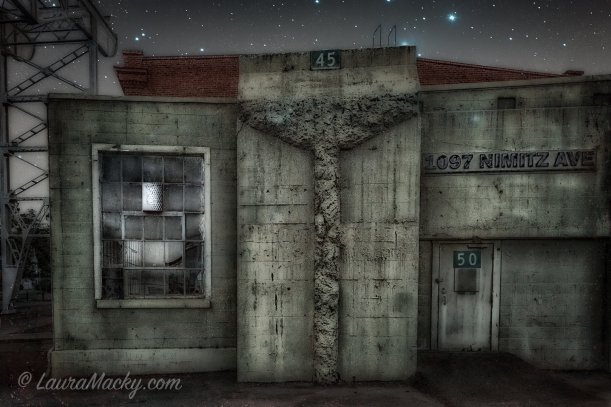 Last night 18 people showed up for my camera club event at Mare Island Historic Shipyard in Vallejo.  I think that’s the largest attendance since I’ve been doing this.  It was really nice because people seemed to be excited about the location.  Already over 50 pictures taken by club members have been uploaded into our meetup event online.

In these images you’ll see the street address containing “Nimitz”.  The name “Nimitz” is after Commander Chester W. Nimitz of the US Navy’s Pacific Fleet during World War II.  He moved to the San Francisco Bay Area after the war and served as a Regent of the University of California from 1948-1956.  The name is popular around the bay area.  Along with a street on Mare Island named for him, Interstate 880 (the Nimitz Freeway) is also named for him.  I still call the freeway “the Nimitz” and have never quite made the switch to saying “880”.

A few posts ago I shared some history of Mare Island and you can click here if you’d like to read more about it.